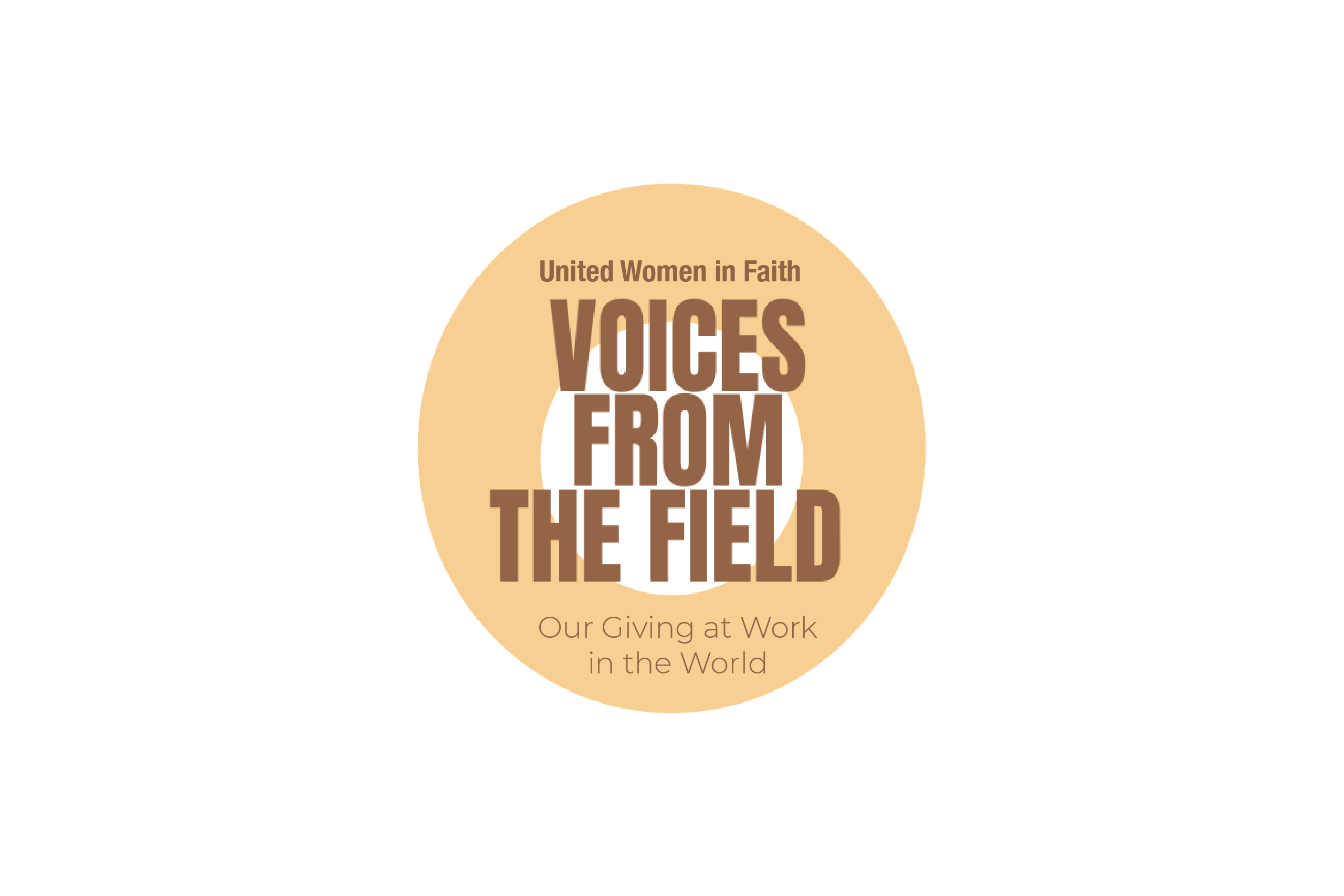 Jan./Feb response: Voices From the Field

Meet the women who are making real and positive changes in their communities, around the block, and around the world. These changemakers are funded and supported by your giving and the national and international work of United Women in Faith.

The Voices From the Field conversations via Zoom, held in real time and attended by hundreds of participants, feature United Women in Faith grant recipients and grassroots women from regions in the news and in our prayers.

When the pandemic hit, the missionaries who were supposed to travel around the U.S. sharing their good news and good work were grounded. So Global Ministries initiated the virtual missionary itineration model, whereby missionaries could visit churches without having to travel. Tatiana Dwyer and Betty Gittens, executives for international work at United Women in Faith, brainstormed with Sandy Wilder, mission giving planning team member. The three realized, “Why not share our regional missionaries’ work and stories via Zoom too?”

In early fall of 2020, the team offered a test program for education and interpretation conference coordinators. The conversations took off. In the early winter of 2020, that initial successful webinar was expanded for all United Women in Faith members and friends. The webinar was an open invitation to tune in and converse with the Sierra Leone country team leaders. Since that first offering, Voices From the Field is offered quarterly; and the programs oscillate between international and national United Women in Faith work.

Traveling the world without leaving home

Cynthia Harry calls the conversations “enlightening.” She especially likes that the women are Zooming in from their own regions and you can get a feel for their contexts and locales.

“I’m just in awe at what they’re doing and how they’re able to do it,” says Harry, who has filled many United Methodist Women and United Women in Faith leadership positions in her local circle and conference and is now on the South Central Jurisdiction on Nominations. Harry says that because she is legally blind, she wouldn’t be able to visit these places without the exposure through Voices From the Field.

Harry, a Hamilton Park United Methodist Church member in Dallas, Texas, calls herself a “continual learner.” Her attendance at several Voices webinars has, she claims, been a way to live out one part of the Purpose of United Women in Faith, which she summarizes: “This is ‘expanded concepts of mission of the global mission of the church.’” She adds, “We see where our moneys are going globally.”

She is also impressed by the deep appreciation the women have for the grants, loans, and support received from United Women in Faith. “It makes you want to give more. We’re empowering women, children, and youth. … In the end, [Voices] will help our church to grow.”

As for technology innovations, Harry says, “The pandemic has shifted us to a different mode of learning. I’m really enjoying Zoom. I can stay at home and keep learning.”

Ellen Lipsey, South Central Jurisdiction president and member of the Program Advisory Group, agrees. She calls Voices From the Field, “my window to the world.”

A lifelong member of United Methodist Women and United Women in Faith, Lipsey recalls helping her mother with books for Schools of Christian Mission (now called Mission u). She celebrates the transformative education offerings of United Women in Faith, whether they be Reading Program books or Mission u resources. “Among all of these opportunities to learn more, I love Voices,” she says.

“Just being able to see the women and hear them talk, it’s so exciting to me. This organization is so intent on helping people who need a voice or need resources so that they can take action.” The most impactful recent episode for Lipsey may have been the Ukrainian peacemaking women.

“That session of Voices From the Field in Ukraine showed me how we’re at work there too. I was impressed that we have so many connections so that we could be in touch with those women and get started to take care of some of the needs of the people initially affected.”

The highest engagement for a recent episode of Voices From the Field highlighted the work of our sisters in Ukraine and their concerns for women, children, and youth. As the world was horrified by Russia’s invasion of Ukraine, the dialogue on Voices echoed that global concern, as wars have always taken a toll on society’s most vulnerable members. Nearly 800 people have attended the original or later viewed the Ukraine episode of Voices From the Field.

On that episode, the depths of the despair are tangible. “We can’t help everyone. It breaks our hearts,” says Olena Suslova, a peace activist at Women’s Information Consultative Center in Ukraine. Suslova talks about short-term needs and long-term strategies, which include prayer, financial support, and solidarity.

As Lipsey remarks, “A lot of that work goes on all the time—but sometimes we’re not aware of it. Voices is a great opportunity to hear and see the people from the field, people who may seem far removed but who we are connected with.”

So if you’ve ever wondered where your Mission Giving and pledge goes, tune in to Voices From the Field, a quarterly online series that highlights the impact of United Women in Faith’s work, globally and locally. You are likely to make new friends and expand your learning about the world.

Mary Beth Coudal is a teacher and journalist in New York City.

Listen to the response podcast